In honor of the 20 Things I'm posting over on Boston.com Moms today, I thought back to the Facebook meme that was popular back in 2009. With some slight changes, I posted (most of) the below on January 28, 2009, and have added in some current reflections on how well it all holds up. I highly recommend this exercise! 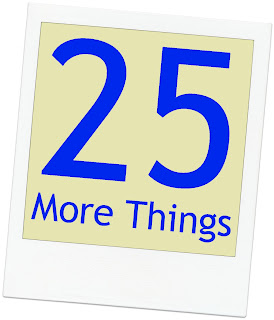 1. My brother Ryan is one of my best friends. I'm incredibly proud of the person he has become and all that he has accomplished, and he's helped my life in many Google-influenced ways.

2. As a kid, I was obsessed with Cabbage Patch Kids. I vividly remember receiving my first and last ones, and the time I got my first set of straight A's and picked out Cabbage Patch Twins.

3. Goldman Union Camp Institute, GUCI, was my home for 5 summers. I loved that place and would go back tomorrow if I could. It had a huge impact on my Jewish identity, and I hope my kids will go to Jewish overnight camp some day. (Hannah went last summer!)

4. My favorite year, despite Algebra, was 8th grade. I had so much fun hanging out with Jen, Marc and Robbie in Mr. Guiliani's choir room during lunch each day.

5. I can be intensely claustrophobic, especially in caves. I discovered that fear during a trip to Israel with my family in 1994, as we tried to make our way through some tunnels dug by the Crusaders. So not for me!

6. One of my biggest regrets, though I had no control over it, was that I never made it into the SHS Show Choir. However, I don't regret my decision not to even try out for it senior year.

7. Part of the reason I don't regret that is that I was N'siah of Chaia BBG #220 (president of my youth group chapter). I still remember the first meeting I led, and how nervous I was.

8. My freshman year dorm room at Brandeis University had a ton of overnight guests (no, not that kind!), such that it was dubbed "Motel 317." I miss being with the various iterations of "The Management" - Carol, Julie, Mike, Aviva, Julia - everyday.

9. Sophomore year I lived in a castle on campus. I was a proud Jewish American Princess.

10. I also became "the email girl" that year as I instituted Brandeis Hillel's first email list for upcoming events. It was sent from my personal account then - how quaint it seems now.

11. I believe it is crucial that people work in a customer service capacity at some point in their lives. I spent a summer in college as a bank teller, and learned a tremendous amount - especially about check kiting.

12. I also regret not studying abroad my junior year. I always thought there would be time later, but I've still never been anywhere in Europe. I think it's a part of my development that is really lacking now. (At least I've now had Paris!)

13. I met my future husband, Marc, via AOL Instant Messenger in the fall of my senior year of college. My screenname was LilMisBusy, and I still use that for my blog. I knew I'd marry him on our second date, when he said he liked the name "Hannah" as we watched the movie "Playing By Heart." This year is the 10th we've spent together. (Plus 4)

14. I got my MBA from Boston University for free, as my two employers paid for it as a benefit. Ah, how I miss the boom times. I still have undergraduate loans to pay off though. (Still true)

15. I got pregnant with Hannah after my first semester at BU, and was pregnant with Max when I ended the program four and a half years later. It took a long time to do, but I'm glad I did it.

16. The best class I took during my MBA program was on decision-making and the biases we employ when making decisions. All the time now, I stop and think about how biased I can be - and yet I usually don't change anything.

17. I had a miscarriage in December 2007. It was a very isolating and traumatic experience, and I wish people talked more about miscarriage so that you don't feel so alone when you're going through it. And I've wanted to put that in writing somewhere for a long time now.

18. A few weeks later the job posting went up for the job I have now. I wouldn't have gone for it if I was pregnant, so I think it was a blessing in disguise. My title is Vice President, Bank Loan Product Associate (I checked my business card for that!). I could tell you what I do, but it really changes everyday. We tell Hannah that I keep track of people's money. It's somewhat accurate. (Well, at least they call me "analyst" now.)

19. I have apple martini green counter tops in my kitchen. When we bought our house, the kitchen was a total disaster, so we demolished it and had it completely redone. I am proud that I picked out most of the items we used, and love that Marc designed such a perfect space for us.

20. I read a ton of blogs, particularly parenting blogs. Google Reader is my friend. I wish I had more time to spend on my own blog, lilmisbusy.blogspot.com. (It's feeling very time capsule-y in here! And wah! Goodbye, Google Reader.)

21. I believe in retail therapy. One of the hardest adjustments after becoming a parent was that I couldn't cure a bad day by shopping for myself after work. I wish I could shop way, way more than I actually do. (I still struggle with that idea!)

22. I'm insecure about my age (though I don't mind admitting it - 31). I'm a young mom, and young to be so far in my career too. I'm also very bad at guessing how old other people are. (All still true, four years later I'm still always feeling too young.)

23. I'm addicted to Gossip Girl and The Real Housewives of Orange County. So different, and yet so much the same. (Still true, with tweet to prove it.)

24. I could eat chicken fingers alone for the rest of my life. (YEP.)

25. I like to look forward to things. If I don't have a big event coming up on my calendar, I get depressed. So some of you - and you know who you are - get engaged, get married, have babies, invite me to something. I'm getting impatient over here! (So what are you waiting for?)
Cheryl Pollock Stober at 12:00 AM
Share