We Noticed You, Hannah 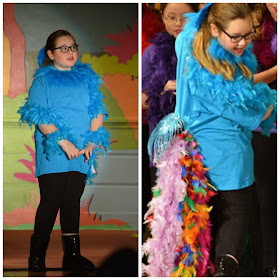 After months of build up and excitement, Hannah's fifth grade play, "Seussical," finally happened this past week. As you might recall, she handled her audition experience like a very mature 10 year old, and, somehow, I was able to figure out a costume that met all of her specifications and expectations. I volunteered to handle the ticket assignments, and attended and photographed two of the rehearsals. By the day of the show, I was more than impressed with all of the fifth graders and their teachers, I was blown away by what they had managed to put together. And I was so, so proud of Hannah.

She played the role of Gertrude McFuzz for the first half of the show (most roles are shared), a bird with a one-feathered tail, who has an unrequited love for her next-door neighbor, Horton the Elephant. Gertrude takes some pills to enlarge her tail, and sings a song trying to get Horton to notice her, but he never does. Then when Horton is in danger, Gertrude's tail is too big for her to be able to fly to his rescue. The play ends with Horton finally noticing Gertrude and she offers to help him raise his elephant-bird...which is another story altogether.

Hannah did a fantastic job in the role, projecting her voice and with great comedic timing. She told me she wished she could do this at least once a week. She seemed at home on the stage, and even when some things went wrong along the way, she learned that she needs to recover and function as part of the team.

I hope she continues to find opportunities like these, and that she keeps being the bright star she already is. Here's a clip of one of her solo performances from the show. Horton may not have noticed Gertrude, but the audience definitely noticed Hannah.