It Was Everything: The Listen To Your Mother Boston 2014 Wrap Up 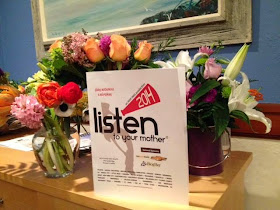 I'd seen that quote a while ago, and when I dared to type it in my Twitter drafts the morning of our show this past weekend, I felt that "magic sparkler energy" that I had been assured I would feel. I saved the tweet, knowing that in the post-show chaos I'd want to send out a quick word to the vast LISTEN TO YOUR MOTHER universe that awaits this news, and I said a prayer that it would still be the tweet I'd want to send.

But I never doubted why I was doing it. I knew that no matter what went on behind the scenes, the show itself, the stories we would be telling, would be amazing. And they were. I'll be sharing my story with you later this week.

That night, our fearless leader Ann said she was heartbroken not to be able to attend all of our shows in person, and I responded with the following. "It was everything, EVERYTHING, that you all promised it would be. Our cast was flawless. The venue was lovely. The audience was warm and fully engaged. For the first time ever, I cried while reading my piece, and so did my mom AND my 10yo daughter. Jessica and Phyllis were amazing. We took in a couple large donations for our cause. I'm completely exhausted but have one last question: WHEN CAN WE DO IT ALL AGAIN?"

THANK YOU THANK YOU THANK YOU to Marc, Hannah and Max for all of their love and support throughout this process. To my Mom and brother Ryan for flying across the country to be here with me. To Fillis and John for always being there. To Kimberly, Samantha and Stirling for being our volunteers and live-tweeting the show. To the friends who came and inspire me to keep building this community. To Jessica and Phyllis for accompanying me and my million emails on this journey, and to our cast for sharing yourselves with us so fully.

We'll be back next year. And there are lots of cities still left to perform - check out the schedule at listentoyourmothershow.com.

Here are a few posts written by our amazing cast:
Dollops of Diane, "Listen To Your Mother - Show Recap"
Don't Mind the Mess, "Thanks for Listening"
Next Life, NO Kids, "Our Power is Not Unique"
Eyerollingmom, "Desperately Seeking the Humor in Perfect(ly Flawed) Children"
Cameron D. Garriepy, "31 Flavors of Fearless: Sixteen, Listen To Your Mother"

And here is the Storify with all the social media shout outs I could capture. 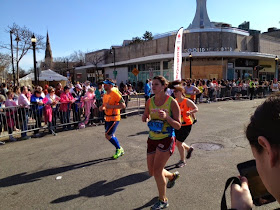 Somehow, it's one year later. I'd put the 2014 marathon date on my calendar fairly soon after the 2013 marathon, because I wanted to be there to support the runners and the city where I've spent half of my life. But instead I spent the day at work, as I'm taking time off later this week. It was a frustrating work day (remember that trip to Pairs? It's off.), and I regretted my decision to work instead.

But the day was salvaged when I found myself early for my dinner and book reading plans with Jessica. I didn't expect to get to Coolidge Corner as quickly as I did, and I found myself with 30 minutes to spare and able to walk right up to the barriers. By this time, those still running had been at it for over five hours. Many of them were walking, some of them looked like they were in a lot of pain even, but they were still going.

I cheered, shouting out names and encouragement to all who went past. The runners from the MR8 team, in particular a double amputee, drew lots of cheers from the crowd. There was a man with the stars and stripes shaved into his chest hair, and a pregnant woman running with a sign that said "Mary + 1." I saw a Twitter friend and a coworker, and many guided runners who needed assistance due to various disabilities. I cheered, and I'm sure like many others yesterday, I cried.

It was a beautiful day. Congratulations to all 36,000 runners, and a giant thank you to all who helped make it a safe place for all of us. Boston is indeed strong.
Cheryl Pollock Stober at 12:40 PM No comments:
Share

The Secret to Better Mondays 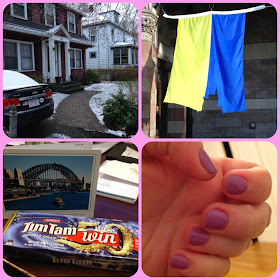 I woke up this morning after a full night of sleep, the first one I've had in ages (yes, my kids sleep through the night just fine. Their mom, not so much.). I couldn't believe the snow outside our window, but I just had to laugh at winter's last grasp. I made my walk to the train without slipping, and that's all that I wanted.

I was carrying a giant poster tube to be dropped off at the Old South Church, our venue for the show (TEN MORE DAYS OMG), on the same block as the Boston Marathon finish line. Yesterday was the one year anniversary. I walked around a bit, and one of the church congregants struck up a conversation with me as we waited for the church to open. We stood beneath the banners installed for the anniversary, that were damaged when left outside for days while the site was a crime scene. It felt good being there. I sat in the sanctuary for a few moments, just taking everything in.

I got to work and found out that I'm going to travel to *Paris* in a few weeks. It's going to be just like "The Devil Wears Prada" except with more numbers and less Prada. Far, far less Prada. But still, Paris.

Then my Australian counterparts randomly sent me cookies ("biscuits") and a nice note. I've worked with them for years and that's never happened before, so it was an especially nice surprise.

I had lunch with my lovely friend Kimberly of Red Shutters. She's my conference buddy and we started talking about BlogHer '14 and I so can't wait.

The afternoon passed quickly and I got a lot of work done. I even decided to get my nails done before picking up the kids from aftercare, as I'd stress-picked off all my Shellac.

So why am I telling you all this? It was a good day, sure. But really, I think I've figured out the secret to having better Mondays. The secret is that they should happen on Wednesday, when you also know you have off on Friday. And then have lots of great stuff happen too. :)
Cheryl Pollock Stober at 9:09 PM No comments:
Share

It's been a while since I've had a chance to write here.

It's been busy, like always, and in the past few weeks there have been articles giving that word, "busy," quite a bad rap. It started with a new book that I really want to read, "Overwhelmed: Work, Love and Play When No One Has Time." I definitely have my moments of overwhelm. There are some unnecessarily difficult circumstances that lead to situations like the one I described in this post, "Perfect Storm." But the articles I found myself disagreeing with are the ones that claim we use busy as a status symbol.

I *like* being busy. Two months into my freshman year of college, a friend I'd just barely gotten to know gave me the book "Meditations for Women Who Do Too Much" for my birthday. She'd clearly picked up on something that I don't think I'd really noticed about myself yet. But I remember thinking to myself that I just wanted to experience as much as I could, even if that meant it looked like "too much" to someone else. Nothing has changed since then.

I'm not trying to make you keep up with me, and I'm not judging you for not doing as much as me. Whenever I look at my life, the things that give me the most pleasure are the ones that keep me the busiest: things like LISTEN TO YOUR MOTHER, regularly going to synagogue with my family, making dinner plans with friends, writing on this blog. Deciding to be less busy wouldn't take out the less fun aspects of life, like sweeping the floor and dealing with car repairs.

So don't worry that I'm too busy. I could spend more time at home, doing less, but it wouldn't translate into a less busy life, just a less full one.
Cheryl Pollock Stober at 4:28 PM No comments:
Share

"Frozen" fatigue is all over the internet, but I promise, this post is about more than a song that has captured little (and big) hearts everywhere.

At the beginning of the year, I thought I was doing well. January came and went, filled with snow days, and that helped me keep a good handle on getting things done. February brought its own challenging weeks, and four very full days of auditions, but I took a day off of work to spend time cleaning and sorting. I even wrote a blog post in my head (um, yea, there are a lot more blog posts in my head than on my blog) about how producing a show is a form of self-care, because I was so in love with the audition process and the highs of putting together our cast.

March, however, was a different story. Too much cold, too much snow, too many emails sent that never got responses. And, unfortunately, too much time spent cleaning and not letting things go. I just can't. I've still prioritized cleaning over other things. So what did I drop? Some sleep. A lot of TV. Blogging. I've made it back to the gym for three weeks in a row now, and I'm happy with that. But I haven't found a solution to the cleaning and the laundry. If I let them go, they don't actually go anywhere. I haven't been able to figure out if the tasks end up taking less time or longer once I've let them accumulate a bit, but they do feel more painful than my usual habits of staying on top of things.

So, it turns out I'm not very good at letting it go--not much of a surprise there. But would I change who I am?

Well, yea, I could use a little more tolerance for crumbs on the floor.
Cheryl Pollock Stober at 9:40 PM No comments:
Share
‹
›
Home
View web version