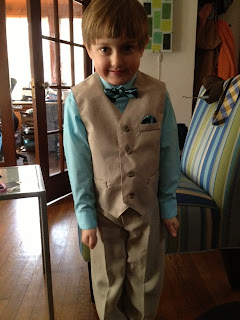 I felt like a Max-specific update was in order because the kid is simply a riot these days. On the cusp of kindergarten and all the big kid-ness it should entail, except that it doesn't because then you go off to elementary school and realize you're the youngest all over again, but I'm sure you know what I mean.

Anyway, he is so five years old and all that comes with that. He makes me crazy by practicing the four questions for the Passover seder to the extreme, then refusing to do them when the time comes. He asks for help then refuses to let you help him (unless it's buckling his seat belt - then suddenly his very capable arms become very, very tired). He hates getting in the shower and hates getting out of the shower. He will still try to whine and cry to get his way, but it's only for a moment. He is the confounding mix of fearless and shy; he knows no physical limitations yet wants to disappear when another adult speaks to him.

I have a new theory on why grown men don't speak as much as grown women. If most men were anything like Max as a boy, they have simply used up all of their words by the time they make it to adulthood. There is so much screaming, shrieking, story-telling and dreaming to be shared at this age. There are fewer mispronunciations these days, but they include "panado" for potato. As exhausting as listening to him can be, I also never want it to stop. 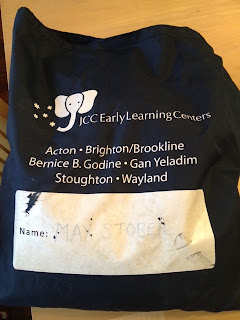 He's reached another milestone for all parents of small children - the end of the nap bag. I've been waiting for this day for nearly four years, and the email came the other week when we were told he no longer needed to schlep his blanket, crib-sized sheet and pillow back and forth to school each week. Somehow, we made it through these years using all of the same items we started with, which of course I consider a personal accomplishment. Despite spending a large portion of each weekend doing laundry, that nap bag has always been a particular source of stress for me, and I am not the least bit sad to see it go. Marc was a bit shocked that I threw it away without remorse, but I knew that if I decided to keep it now, I'd never find the strength to let it go again. And while I know we will move on to lost elementary school library books next fall, another thing I found stressful on a weekly basis, it's good to know we're making progress.

One last Max-related note - the kids gives me compliments like no other. He loves to tell me I'm "pretty and beautiful" - even when I haven't bothered to do my hair or dress well. He's usually fishing for a compliment back, like when he was wearing his seder outfit above, but I will gladly provide one for him. And it's always nice to hear him say something other than a karate-related "HI-YA!" (See the video below) How I love that kid.