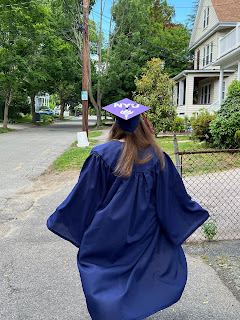 Over the past 12 months with Hannah, her senior year and last one as a child living at home, I’ve had plenty of opportunities for crying. There were so many “lasts,” particularly from March through June, and many nerve-wracking, stressful, crazy joyous moments. Hannah wears her heart on her sleeve, and seeing her cry always makes me cry (I think that phenomenon goes both ways). For example, we cried both before and after she got accepted to NYU, her dream school. But most of my tears have been fairly well-contained, at home, in private. I didn’t cry at graduation. I didn’t cry at prom, even when the sight of all of her closest friends in their finery literally took my breath away. I didn’t cry at her final South Stage performance or Senior Showcase (maybe because I immediately had to launch a letter-writing campaign to save a teacher’s job, but anyway). I could have cried the other day, in the Target parking lot, as it hit me that this last shopping outing to buy dorm supplies was at the same store as her very first shopping outing, or outing really anywhere beyond her pediatrician’s office. At two weeks old, on a Saturday night in January, her dad and I took her to Target for the first time. We needed more diapers, of course, but I remember feeling desperate to go *anywhere* at all. It was cold, she was tiny, I didn’t really drive then, and being at home alone with a newborn was so hard for me. Hannah was a good baby, but I was missing the rest of the world, and so excited to roam those aisles. I could have cried today for that me in 2004, for how much I’ve changed since then, as much as I could have cried for the tiny infant somehow buying very different items today. I’ve said it a million times already, and I’ll say it a million times more: I am so incredibly proud of her. She has worked so hard, been a good person and a great friend, and she deserves every bit of happiness (and some struggles to be sure) as she enters this next part of life. But I’m also so incredibly proud of myself. Eighteen years of making so many decisions on her behalf. I won’t claim to have done everything perfectly, or that there aren’t other paths that could have been taken, but I am really satisfied with the one that led us here. I recently spoke with several old blogging friends, most of whom don’t write anymore, citing “the kids got older” as the excuse. It’s really hard to know where the boundaries are in writing, and we all didn’t want to get it wrong. It’s why I’ve written less too. But so much of her story is my story too. And my story is changing too. So I’ll definitely feel the lump form in my throat when we drop her off in her dorm later this week. And I might actually cry a bit. I’ll rely on Max to get me through it, though I’m sure he’ll just ask how I’m going to manage when it’s his turn in four years. I wonder who I’ll be by then.