What a difference four years makes! When I posted about Hannah's bat mitzvah, four years ago to the weekend, it was also just after Trump's inauguration, and the women's marches, and everything felt scary, and incongruous to be celebrating. Now, in the midst of a global pandemic and after the Capitol insurrection, it's scary still, but the Biden inauguration brings hope for a return to normalcy. In the days since Max's bar mitzvah, I can at least say I feel better about things than I did after Hannah's.

And in that way, Max's bar mitzvah felt like a ray of light in an otherwise dark time. He led a lot of the service, which of course was virtual, with our family and friends watching online, the clergy in the sanctuary, and the four of us in the chapel. He chanted Torah and Haftorah perfectly, thanks to Marc's efforts in tutoring him, but also because Max brought such an unusual level of confidence to what he was doing. I've never seen a 13yo boy exude more presence on the bimah, and he commanded his performance. Max spoke about "kotzer ruach" which the Torah describes as a shortness of breath that the Hebrews experienced while in Egypt, due to their slavery. He translated it into our modern times, where COVID-19 is a shortness of breath, and so many other atrocities in 2020 took our breath away too. But Max then encouraged us to think of the times when we've had a shortness of breath from the positive things in our life, like he has had while singing and dancing at camp. He reminded us to maintain hope that even in these challenging times when it can be hard to breathe, there are still good times to be found ahead.

That's what the entire day felt like it was about for me. As the pandemic settled in during those early months, we still thought there was hope for the day we'd been expecting to have, that by January we'd be able to travel, or at least host our friends, something, anything. Having gone through Hannah's experience, I knew I had vendors in place that I liked, and I also knew I could scramble during those last six months or so and still get everything into place. I waited as long as I could, until the fact that everything would remain virtual was undeniable. And so we pivoted. We threw the best damn Zoom party we could, and we honored the people in Max's life, and we celebrated reaching this day in our family.

It does not go without saying that I missed my mom so much, and still can't believe she didn't see this day.

I will share more about what we did when I get the rest of our photos back - yes, we still took photos, which is one of the most important aspects of the whole thing for me, and I can't wait to see them. For now I'll close as I did with Hannah's post, but the pandemic-modified version. While Hannah and I had a "bat mitzvah high-five" for each task accomplished, Max and I had a "bar mitzvah elbow" instead. I told you four years changes a lot. 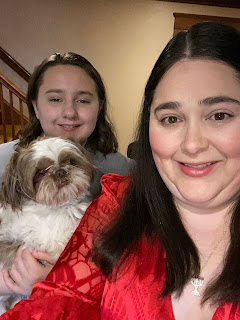