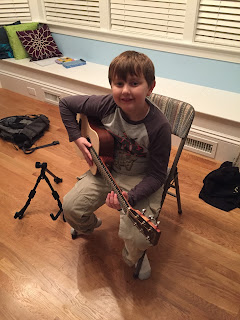 With the chaos of your sister's upcoming bat mitzvah, your birthday has taken a backseat this year, and you are so totally okay with the whole thing. I never would have expected that from you, but I should have. Your love and devotion to others is fierce. And you know you are loved, too, so your party can wait. Especially since you got your new guitar a couple weeks early.

Eight was a pretty cool year. You were Zebulon alongside your sister in "Joseph," and a baker and a wolf and then a wolf again. You tried snorkeling and almost joined the dark side. You entered your first spelling bee, going far but getting out on the word "linen." You came home from your first month at Camp Yavneh and were a changed person, more mature and aware of the world. You lost some teeth and gained a retainer. You loved the presidential election process, and took the whole thing in stride, better than many adults I know (self included).

You still binge watch A LOT of Netflix, particularly "Brain Games" but at least try to include me with "Fuller House." You are "oooh yeeeeah!" when you figure something out. Your personal hero is Neil deGrasse Tyson. Your ear for music is insane, plucking out "Maoz Tzur" on your new guitar without even having had a lesson yet. Your love for TMLs -- that's turkey, mayo and lettuce for uninitiated -- is unending. You're still a great hugger, but now you like high fives too. And I still feel so very fortunate to write that your sister is your very best friend.

So, nine. The last single digit year in our house. For every time I get choked up about how old Hannah is, you reassure me that you're still little, but that's not for much longer either. We don't have many plans yet for 2017, but I know a year from now I'll be looking back once again and seeing how much you've grown, even if life just continues on as it has. I love you, buddy. Happy birthday.