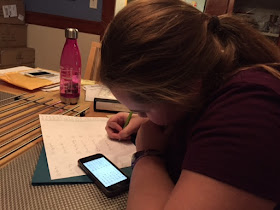 Hannah forgot her math homework at school. Through the wonders of technology, her friend was able to snap a photo of their worksheets and now Hannah is copying them by hand (because they were half-done, and she doesn't want it to look like she didn't do the work herself). And she is extremely frustrated. Apparently, "everyone already knows how to do all this because all of the other kids take Russian math."

She would really hate me if I made her take Russian math instead of letting her be in the fall play. So no Russian math, and more angst over negative numbers and early algebra.

I was awful at this stuff myself. I used to write "WATCH THE SIGNS!" in giant letters on tests and quizzes because I'd just assume everything was positive, all the time (you'd think I'd be more optimistic!). But she *isn't* awful at it, she's just learning something new and that takes time. And lots of reminders from her mom that math has been very good to our family, and to keep at it.

So I'm by her side, doing middle school math, after hours spent commuting, a high-intensity work day, fielding a call from aftercare that Max bumped his head (he's fine), picking him up from aftercare, cooking dinner and cleaning up.

At least middle school math is a little easier for me, the second time around.
Cheryl Pollock Stober at 7:02 PM
Share