A Blessing for Sara

I've been in San Francisco this weekend, by myself. Hannah is now at overnight camp for the next seven weeks (more on that in a future post, I'm sure). Max spent a few days in CT with my in-laws, and Marc later joined them there.
I'm here, along with my parents, to meet Sara, my brother and sister-in-law's first child. Today we are all taking part in a blessing ceremony for her, and Allison and Ryan have asked me to be Sara's godmother. I've never had that role before, and I've been thinking a lot about what I would most wish for Sara at this auspicious moment.
There are many old jokes along a similar refrain: two Jewish people, three opinions. But behind the joke is a serious thought: we are encouraged, at all levels and at every age, to question, question hard, the world around us and what we are supposed to believe. Nothing should be taken at face value. We are instructed to learn, to research, to develop our own beliefs and opinions and find the things that bring meaning to our lives. And then once we have found those things and our purpose, we should use our voices to tell stories and to bring about change, to improve our world.
So my blessing for Sara, my prayer is that she will grow and learn and share her voice and who she is with the world. I may be 3,000 miles away most days, but I hope that some day she'll be loud enough for me to hear her, wherever she is.
In the meantime, Sara, just work on the growing piece. And maybe sleep through the night once in a while. 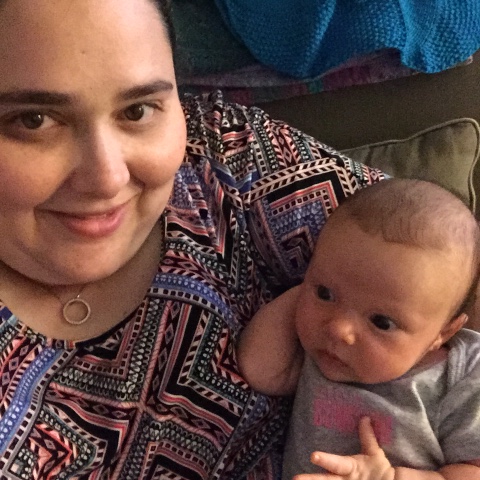 My first selfie with Sara. The first is always the best, right? 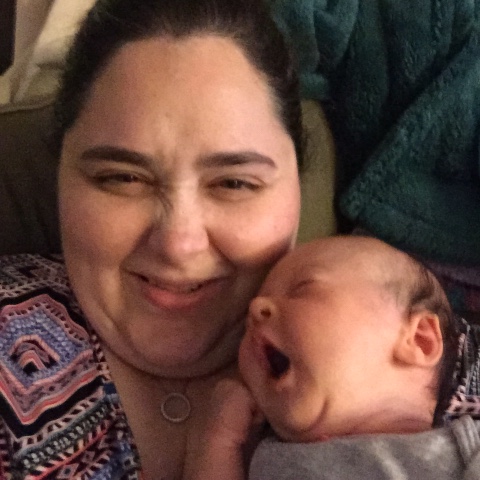 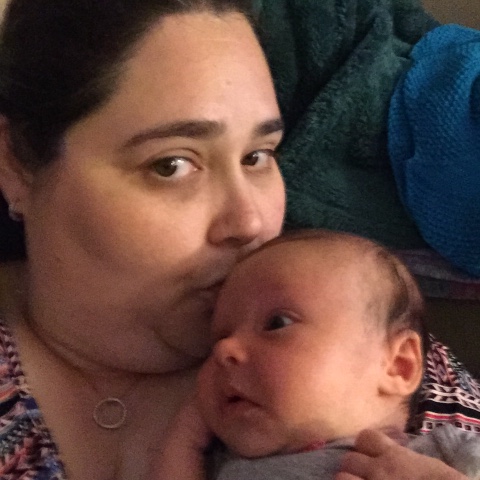 The Kid is Alright 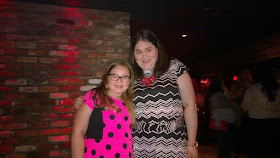 Today is Hannah's last day of after school care. Her last day ever of needing daycare, as far as I can  see.

After entering family daycare at 12 weeks old, she received full-time care, first by a loving, caring and dedicated family, then in three daycare centers as we moved and things changed. In kindergarten, she began the after school program at her elementary school. The first month of school was all half days, and aftercare filled in the rest. Then she had two full and three half days from there. In first grade, she attended five days a week from 3 pm on.

In second grade, because we added in religious school, she began attending on only Mondays, Wednesdays and Fridays, which she has done for third, fourth and fifth grade too. I've handled Tuesday afternoons while working from home, and Marc worked from home on the random Thursday afternoons off that she also had. (And a special shout out to our friends the Pellers, who have brought Hannah home with them most Thursdays and took her to Hebrew school; we're so grateful to have you in our lives!).

Now I know she's my kid, so of course I'm biased, but I think she's awesome. She has great friends, does well in school, has a close relationship with her family, and a good head on her shoulders. While I'd like to take all of the credit for that, I know that I've had the assistance of many fabulous caregivers and teachers along the way that have helped shape and guide her too.

I also know how lucky we've been, and how privileged we are. I've read the daycare horror stories and I know this isn't what everyone's experience is like. But as a young working mom, I held out hope that she would be okay, and she really has been just fine. I only have a sample size of two, but so far, Max has been just fine too.

She's moving on to middle school, where she'll have options for how she gets home and what she does after school. I'll be thankful for cell phones and I know we'll be checking in a lot. I'm excited for this next step, and am truly grateful we've made it this far.
Cheryl Pollock Stober at 4:51 PM 1 comment:
Share

Status Update: Overwhelmed, But In a Good Way

I made up a new word at dinner a few weeks ago. Defleated. It's a combination of deflated, depleted and defeated, and it's aptly summed up the recent period for me. I have had so much going on that there hasn't been enough of me left for blogging, which always makes me a bit crazy (or "cray" as Hannah would say). So here's a random update post to catch you up.

My most exciting writing outside of here at BSB was having my LTYM piece published over at The Mid. It's called "The Geology of Motherhood," and I really hope you'll click over and give it a read. It's still incredibly validating to see my words published elsewhere, and exciting to receive a bit of money for them too. I love the fact that something I came up with completely on my own is resonant enough that more people get to read it and connect with it. Here at BSB, I recently passed 200K pageviews, which is pretty cool too. A good portion of them are probably robots though, but if you're not a robot and have been reading along, thank you. So many personal bloggers seem to be quitting lately (or taking an extended break for summer), and I'm always bummed to see that, because I love reading blogs almost as much as I love writing my own (maybe more, since I read everyday, and only write very so often). So I appreciate you sticking with me if you're here, and if you're a blogger, maybe I'll see you next month at BlogHer15? I'll be looking for the other non-sponsored types to have a "what the hell are we doing here" breakdown with me.

If you follow me on Instagram (why not start now?) you've been seeing my almost daily updates on the main disruption delight happening all around me right now: the renovation to our house. I keep wanting to write a post on it, titled "Renovate Me, Baby" but this will have to do. We're adding a two story addition on the back of the house, which included a new foundation for that section. The main goal is to add bathrooms to the single one we have now, and so we're adding a half bath on the first floor and a master bath on the second. Hannah is moving into our current master bedroom when she gets home from camp later this summer, and Marc and I will be getting a new room with a walk-in closet. We're also moving the laundry to the first floor from the basement, replacing lots of windows, and putting in a new heating and cooling system (shout out to my window AC unit that is serving me well for the SIXTEENTH summer--that is, if it ever gets warm again here). It's a huge project, we're currently six weeks into it, and no, I don't know when it'll end. Our team has been working very fast, I think, and we're really thrilled with everything so far. But it's disruptive and time-consuming and I feel like I'm playing human Tetris as we try to reconfigure all of the stuff in our house into the remaining spaces. It's all an amazing wonderful thing though, and I know we're going to fall in love with our house all over again when it's done. Here's how things look right now:

We've started to do more to plan Hannah's bat mitzvah, which is about 18 months away now. I'm already overwhelmed thinking about it, though not about all of the specific aspects of that day itself. I get the "I can't believe we're here already" overwhelm. She's finishing elementary school later this month, going to middle school in the fall. She's done with our synagogue's version of Hebrew school. She's going to read from the Torah for the first time at family services soon. She's acting in another play this weekend and she's on Pinterest and she's got braces and her social calendar reflects how in demand she is. And she's awesome--though she'd probably tell me I can ditch the punctuation here, because it's all too formal for her, before she texts you "gtg" (that's "got to go" for the uninitiated). I'm not usually the "my baby" type, but it's hitting me hard lately, and I don't know how I'll hold back the tears when the 5th grade sings "Don't Stop Believin'" at their concert next week.

Fortunately, Max is still very much a seven year old boy. He's growing by leaps and bounds, but I still know so much of what is to come for him. Though I didn't expect this new style of dressing he's rocking these days, with an open-front button-down short-sleeved shirt on top of his t-shirt, accompanied by his fedora. He was very excited to have Hannah and me attend his end of the year French class play, in which he played a pirate searching for treasure and candy, but all in French. Thankfully the acting was so good that I could understand it without subtitles. ;) He continues to work on his beat-boxing as well, especially with an after school teacher who has taught him some more specific techniques, including how to "solo," meaning making sounds from three different instruments in a pattern. And he's looking forward to this year's Color Day at school, since last year he had a broken wrist at the time. He's had a great year, and I'm excited to start spending Tuesday afternoons with him next year.

I have a new niece! My brother Ryan and sister-in-law Allison welcomed Sara Gloria to the world at the end of May. She's completely adorable and I've fallen in love over FaceTime. I'm going out there to meet her at the end of June, and I can't wait to meet her in person.

My post-LASIK eyes are doing really well. I went back to the doctor just this morning, and I'm seeing well and still can't quite get over how wonderful it is to see without glasses or contacts. Even the simple act of reading a book at the end of the day is easier. The doctor said I might not need reading glasses until I'm 50, so I'm recording that here for posterity and hoping it really stays that way.

I'm still really liking clothing rental service Gwynnie Bee. I'm in no way compensated by them, so this isn't a plug, it's just me telling you about something I've enjoyed. I get new clothes just about weekly, since I'm pretty good about sending back things quickly if I don't like them or they don't fit. I've bought a couple things, and have worn others once or twice before sending them back. But mostly, I don't seem to hanker to shop as much. Adding things to my virtual closet is enough, and I don't seem to spend as much time shopping online (and therefore, less buying too!). Wanna try it out? Click on this to get started.

Phew. I feel like we're caught up now. How have you been? I'd love to hear from you in the comments!
Cheryl Pollock Stober at 8:02 PM No comments:
Share
‹
›
Home
View web version