I Can See Clear(-ish) Now (Most of the Time)

The most important thing you should know is that I can, indeed, see. In fact, I could see immediately after the surgery while still in the room with the surgeon. I believe I gleefully told him that he had a face. I'm sure he knew this already, but to me, it was a face I couldn't see when I was led into the room without my glasses. It was a face I most definitely could not have seen under what I would have considered to be normal circumstances, meaning my contacts or glasses for the past thirty years or so.

Thirty years is a really long time. Deciding to get LASIK wasn't that difficult, as the options available to me weren't so great. I got glasses when I was in third grade, but I never felt that I could see all that well, even in the huge glasses we wore that were considered in style at the time. I got contacts before my junior year of high school, and was immediately in love. My vision was much better, and it was totally worth the pink eye I'd get in college. Um, yea. But I grew up some and started taking better care of my eyes, could afford even better contacts, and the pink eye stopped. I had a few good years before the corneal ulcers then began, first in December 2013 and then again and again this past fall. An eye doctor's off-hand, "you should just get LASIK" has basically changed my life.

We've had so much going on this winter that I didn't have much time to fret over the surgery until the week before. On the last night of wearing my contacts, we happened to all go to the mall, and the kids got new jackets. I found myself walking a few steps behind, staring at them, trying to memorize the image. I kept trying to do that several times over the next few days. I lived under a cloud of anxiety the week before the surgery, not daring to actually say out loud, "what if I can't see again?" But I thought about it a lot.

The surgery itself took only about half an hour, and I was given a sedative. I'm super claustrophobic, and I knew that the hardest part for me was just how close everything was going to be on my face. It wasn't fun. I'm not sure I breathed very often, because I was so scared to move. I was given a stuffed animal to hold in one of my hands, and I'm not sure how I didn't damage it. I could feel my arms shaking. But the doctor was great, talking to me the entire time, telling me how well I was doing. I didn't like it, but I got through it.

And then I could see. Mostly.

It's still a bit blurry on the edges. My eyes have felt tired all week. My follow up appointment showed that my eyes are still swollen and dry from all of the medications I used to prevent infection, so I've been working hard to use eye drops often. But I can see, without glasses or contacts, and it's really amazing.

I may need reading glasses down the road, as many adults do, and LASIK can't correct for that. But I'm hoping to enjoy at least a few years of the relative freedom of not needing vision correction: not worrying if I lose a contact in the middle of the day (or on the lazy river ride), or if I packed my glasses on an overnight trip, or squinting to try to see the alarm clock in the middle of the night. It's pretty awesome.

I'm still healing, but I think the only hard part that remains is that I need to get my driver's license altered. I don't need vision correction any longer! 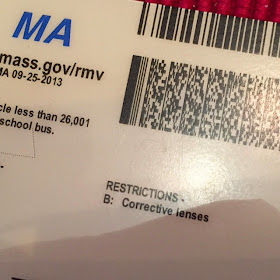