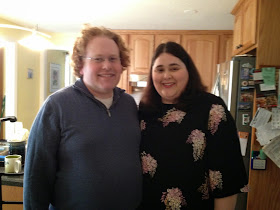 I'm generally not a fan of flowered clothing. This disappoints my mother greatly, but I think it all started with a horrendous flowered teal suit I had to wear to my brother's bar mitzvah. It had large flowers of white and hot pink, with gold buttons and if I'm remembering correctly, gold piping as well. But it fit, and that was the main criteria I needed to fill at that point in my awkward sixteen year old life.

So it shocked my mom when I told her I'd found a flowered shirt I was actually willing to wear, and I'm wearing it today (the photo to the left is from a few weeks ago, when I wore the shirt to Passover seder). The shirt is covered in purple, pink, yellow and white lilacs, and lilacs I love.

Marc and I got engaged on May 13, 2001. I knew it was coming, and yes, you could probably accuse me of pushing the issue a bit. My friend Betsy was coming to town the following month, and I thought it would be the perfect time to throw an engagement party. So when I couldn't find Marc one evening--no answer at his apartment, his job, or on his cell phone--I was fairly certain I knew what was up. He was ring shopping. When he finally arrived at my apartment hours later, he looked more exhausted than I'd ever seen him. While he didn't want to admit it at first, I later offered to go look at what he'd found with him the following day, and he gratefully accepted. I chose something from his final picks, but that wasn't the official proposal.

A few days later, on what was Mother's Day and my future father-in-law's birthday, Marc took me to the Arnold Arboretum in Jamaica Plain. It's the only day of the year that food is permitted in the park, and the lilacs are in full bloom. We found a secluded spot, and Marc proposed, giving me a statue of a wedding couple that he had custom painted to match our particular hair colors (because how would we ever find a redheaded guy and dark-haired girl?). We called our parents from the arboretum, and enjoyed a picnic with sparkling lemonade. It was perfect.

A few years later, we took both kids back to the arboretum, this time on a Mother's Day when I was the mother of two. We have a small lilac bush in our front yard now, too. So no, I don't usually wear flowered clothing, but I have a feeling this shirt will be in rotation for quite a while.