The Having It All Project: Al Norton 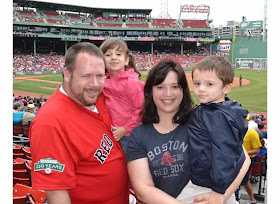 Al and I are both the spouses of someone who attended Newington High School and subsequently moved to Boston. Got that? His wife Tina and my husband Marc became friends in middle school, and last December we organized a brunch to have some of their local-to-Boston classmates and their families get together. Al and I became facebook friends there after, and I could tell he was a very involved Dad. I'm honored that he chose to share all of this with us. Here's how Al is having it all.

Briefly describe your life and what you think makes it unique.

Let's see...I am Greater Boston born and raised, working  full time in real estate - I run the rental department for a mid-sized company with two offices - and writing Two Tivos To Paradise (facebook page), a popular TV blog. I have been married for the last 10+ years, and, oh yes, I am the Father of 4 and a half year old twins. The female half of those twins - my daughter, Genevieve - was born with a heart problem that has led to two surgeries (so far), with a third likely in the not-so-distant future. My Dad, who lives close by, is a 100% disabled Vietnam veteran who sufferers from PTSD. Sure, all those things are somewhat interesting (feel like I am giving a sitcom pitch) but to be perfectly honest, what I think makes my life unique is that I am a Dad who does 50% of the parenting.

Don't get me wrong - I am not saying I do more than that and/or that my wife doesn't do every bit her fair share - just that from most of what I hear and say out there in the world, Dad's do a lot less than that, and it makes me sad; sad for them in that they don't get as much time with their kids/influence on their burgeoning personalities, sad that they make their other halves do so much more work than they do, sad for their kids that they don't get to know their Dads as much as they could, and sad for men in general in that it reinforces the stereotype and makes it harder for that cycle to be broken.

What are some of your favorite tips and strategies for coping with the chaos?
Coffee. Ok, more? Coffee, music, and the Red Sox. I am all about routine and the Dunkin' Donuts extra large coffee I have at my desk in the office every morning to start my day grounds me, reminds me that no matter how crazy the previous night was or how stressful a day it looks like its going to be, in reality it will be over within 24 hours and I'll be back at my desk sipping the caffeinated nectar of the Gods.


The drive to work and then the drive from work to pick up the kids at daycare are pretty much the only parts of my day I get to myself and I don't let them go to waste. I rarely talk on the phone in that 5.2 mile each way stretch, instead listening to the music of my choice at sometimes startling volume levels. If I am really baring my soul here I'll admit that most of the time its a Glee CD that's playing as I get the emotion that goes with the songs (because I watch the show and know the context in which they were sung) as well as the fun of the music itself. Also in the current rotation are Will Dailey, Mumford and Sons, and Johnny Cash (there is ALWAYS Johnny Cash in the rotation).

The Red Sox are pretty self explanatory  I am Boston born and raised so I have Fenway running through my veins. Actually, when we knew we were having twins but didn't know the gender yet we picked out names for all the combinations and if we had had two boys, one of their middle names would have been Fenway. We took the twins to the Futures at Fenway game last year and I am not engaging in any sort of hyperbole when I say that it was one of the highlights of my life.

Essentially I am saying you have to have your vents, the things you do for JUST YOU, so that who you are isn't lost in all you have to do.

Also, to be 100% honest, I cry a lot. A LOT. I have always been a crier and having kids has made it even worse. And the tears come not when I am in the throws of a particularly stressful moment, they come when I am watching Parenthood or listening to a Glen Campbell CD. Hell, this week I cried watching Andy Dick dance on Dancing with the Stars...Hey, don't mock  - you had to be there!!

To be fair, I also lean on my wife for support, using her as a sounding board to tell me when I am justified in my frustration or when I just need to get over it. Having someone who can play that role in your life is invaluable. Having the person who plays that role in your life have a smile that rivals the Northern Lights is an added bonus.

Please share a moment where it all broke down, and how you got through it.
I've been complaining a lot on Facebook lately about how everyone at work seems to need me between 4 and 6, which is when I've picked up the kids and have them at home with me while also trying to make dinner. A couple of weeks ago I was at absolute wits end, with my phone ringing off the hook and me yelling at it (before I answered), "don't you people understand I have a family and a life?!?!", and took a breather from everything in the kitchen, thinking a few minutes cleaning up was just the zen I needed. My phone rang again and I slammed it into the counter, knocking over the twins glasses and creating a HUGE mess. I flat out lost it until I realized I was literally crying over spilled milk, which is just the sort of realization I needed to avoid throwing a full on pity party of one. I cleaned up, took a few huge breaths, and then went back into the dining room and did silly voices to make the twins laugh.

Do you have any balance role models? Anything you try to avoid because it wouldn't work for you?
My wife Tina does an amazing job at balancing an incredibly demanding job and remembering all the stuff the kids need at the same time, so while we have different styles, I look to her as the inspiration to know it can be done. My Dad did an amazing job raising my brother and I and so despite the fact that he did so while high as a kite (on both legally prescribed as well as fully recreational drugs), I am still in awe of how he did it.

I wish I enjoyed wine because the cul-de-sac crew on Cougar Town make it look so good but I don't, and in the last few months I've been trying to avoid using food as any sort of coping mechanism as that leads to me digging through my closet to find my fat pants.

Think back to your 18th birthday. How is your life different from how you expected it to be then?

Being 41 now, 18 seems like a LONG time ago. My mother's death from breast cancer when I was 23 was something I never would have predicted when I was 18 and could have never dreamed the impact it would have on my life; not a day goes by I don't think of her and how much she would have loved my kids and them her, how close she and Tina would have been, and on a very base level how great it would be to have another local - and FREE - babysitter. As much as any single event in my life it has shaped who I am and how I view the world; even when I fail, I still try to remember what really matters in life is the connections we make with each other and I can't let a deal gone south at work throw me off for more than a moment or two. If you had told me at 18 that one of the jobs the 41 year old me would have would be writing about television I'd have been over the moon, that's for sure.

I knew I always wanted to be a Dad but I had no concept of the work, stress, exhaustion, and pure joy that went with the job. The 18 year old me had been in love but had no idea what the difference between those 18 year old-in-love emotions and the way it felt to find your lobster, and the truth is there is no way I could have grasped it since I still had 11 years of pain and heartache to go through before I met Tina, with those 11 years ensuring that once I met her I would never let her go.

Relate to what Al is saying? Leave him some love in the comments. Read other posts from The Having It All Project here. Want to participate? Send me an email at havingitallproject@gmail.com!
Cheryl Pollock Stober at 12:00 AM
Share