As I declared my theme for this year to be "more", it felt appropriate for me to write a quick post in honor of Equal Pay Day, which is today, and share a couple of items that caught my eye. 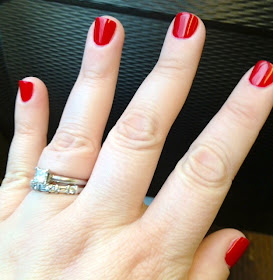 My friend from Hello Ladies has an article on The Huffington Post about some of the costs incurred by women that don't necessarily apply to men, including a "basic drug store face" and more expensive haircuts. Both of those facts apply to me. Yes, I buy almost all of my make up at CVS, except for the Clinque powder I've been buying since the age of 16 or so. And I put off my very infrequent haircuts partly because I'm cheap too - I'm actually finally getting one tomorrow after being annoyed by the length for about a month longer than I'd have liked. And then there's my new thing - getting my nails done. Since January, I've been getting them done about every two weeks. Hannah picked "Hot Rod Red" to the left there. It's definitely an indulgence in my mind, but one that a friend convinced me to allow myself. It's silly, but it does make me feel more pulled together, more like a "real grown up," to have my nails done. I could go without make up, cut my hair at home, definitely skip the nails...but I like those things. They make me happy. I'm sure there are costs men pay that I'm not acknowledging too...but it would be amazing if the Paycheck Fairness Act was passed and more women were paid the "median income disparity of more than $11,000 a year" they're due.

And since it's the movement that's not going out of style any time soon, of course "Lean In" has been mentioned in many articles today. My favorite was "Sheryl Sandberg Wants Me to Ask You For a Raise" which notes a few recent experiences where Sandberg's name was invoked in a salary negotiation. She notes in the book that women should say someone more senior encouraged they negotiate, and well, her book is providing the link for the more senior person to have said so. That article also led me to look into the Levo League's #ask4more Twitter campaign, and I plan to spend time exploring their site too. The idea of being paired with an online mentor - even anonymously so - is really interesting for those who might not have someone to mentor them locally, or have yet to find that type of connection. So if government support for these issues (like no consequences from discussing salary) still takes its time getting here, at least we can encourage each other to be asking for more in the meantime.

Maybe next year we can spend today observing "National Cherish an Antique Day" instead. Like the antique notion of women being paid less than men.
Cheryl Pollock Stober at 9:03 PM
Share