It's been another busy month around here. When I last left you, we were preparing for Passover, and it was lovely. We attended the usual seder in Hartford and then hosted friends for the second night at our house. It was the first time we'd done that, and considering that we had three five year olds in attendance, it went really, really well! 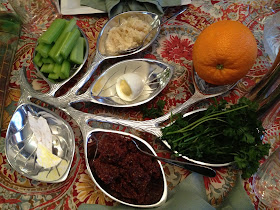 Our Seder plate - with a broken hard boiled egg and a paper shank bone.
Some room for improvement.

I attended two book events this past month, which is unusual for me since I don't read actual books all that often. The first was the launch party for "Minimalist Parenting," co-written by the founder of Boston Mamas, which I've been reading for years. I'm about half way through the book now, and my favorite tip so far is to bring a paper bag with you for recycling purposes when you're de-cluttering a space. I've always had a donate bag and a trash bag, and then a lumbering pile of recycling to bring down to the bin, and don't know why I'd never thought of that sooner! (I also finally got to hang out with my friend Michelle and meet my new in-real-life friend Liz, which was so wonderful.) 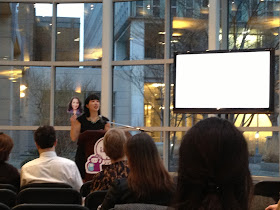 Then the following week I went to see Sheryl Sandberg repeat the same stories I'd seen/read elsewhere, but this time in person. And she truly is impressive in person, despite my still mixed feelings on the book itself. But the book has inspired a group of local moms to start meeting and sharing strategies for balancing work and life, and I'm excited to be a part of that. 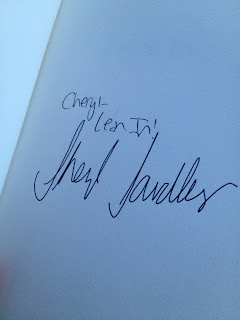 We attended our annual Yom Hashoah commemoration at Temple Emanuel, and this year I was far less involved than in years past. We featured the music of a composer who died in Terezin, and it was truly shocking to hear the music's abrupt end in the middle of a movement because the composer had not had time to finish his work before his death. I had hoped to write a blog post around that time on the whole Justin Bieber/Anne Frank controversy, but never got around to it, so I'll say just this: had Anne Frank been a 14 year old girl living in 2013? It's likely she could have been a fan of his music. Maybe it was narcissistic for Bieber to suggest it, but the bigger tragedy here is that 14 year old girls should have only had to worry over whose music they enjoyed, and not the horrors that Anne Frank and so many others experienced. If Bieber brought a bit more awareness to a new generation of what Frank went through, then I'll take his comments in the likely more generous spirit he intended them. 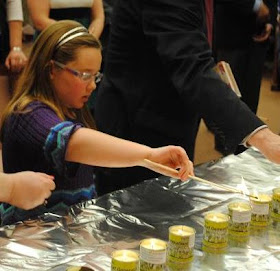 Hannah lighting a candle at the Yom Hashoah Commemoration.
Photo taken by someone from the Terezin Music Foundation.

And speaking of generous spirits, check out this post from Honest Mom about the group of bloggers I went to dinner with about two weeks ago. An amazing, inspiring group - next time, we'll get a picture.

Then this happened. I really thought that would be the worst of it, and could never conceive then of what was to transpire over Thursday and Friday of that week. Living in Newton, one of the neighboring towns of Watertown (the police staging area was our Target parking lot), we were asked to "shelter in place" throughout the ordeal. Marc wrote a thoughtful piece on it, and we were all very relieved when it ended successfully. It was like a snow day without the snow, except also a gorgeous 73 degree day we could only experience through an opened upstairs window. A surreal experience for sure.

Following that, we've had such a normal, normal week. Marc and I had a long-planned overnight in Boston that Saturday, to see "Book of Mormon" - which neither of us enjoyed - and I think our nerves were still a little frayed by the week's experiences. But on Monday we all went back to work and school, to the usual making plans and even a return to my Tuesday 6 am Zumba class. Now I'm looking ahead to May and better weather and hopefully, even better days.

In light of last week's events, I hope you'll join me in making a donation to The One Fund. Stay strong, Boston.
Cheryl Pollock Stober at 12:00 AM
Share