The Kids Grow Up

The last few weeks have been beyond hectic, with a big event happening almost daily. We had birthday parties, class parties, a block party, a goodbye party, a school party and a family party. We hosted my sister-in-law Rachel and two year old niece and nephew, Evie and Nate, with my in-laws staying locally as well for a few days. There's been so much to celebrate, but it's also been a time of transition with the ending of first grade for Hannah, and moving on to a new classroom for Max.

Hannah has been looking forward to the start of camp for months, and is beyond thrilled to be in a group with her oldest friend from Gan Yeladim and her best camp friend for three years running. But when I picked her up from the last day of first grade, well, some tears were shed at the thought of moving on and being in second grade. It's been such a big year for her, and she has been so proud of all the progress she's made at school, that it was difficult to say goodbye to it all, but she seemed happy at camp drop off this morning.

Tuesday was Max's last day in the Room E Elephants, and he proudly sang along to all of the songs with his friends. He's moving on to Room K Koalas (the animal aspect is a big part of the identity to him), and unfortunately, away from the group of kids he has been with for the last two years. We didn't point that out to him, and have been talking about all of the positive aspects of the new class, but my heart breaks for him a bit. Hopefully, he will enjoy the new class too much to notice. After five days at home, going to school today made for a rough morning in the house, but he seemed resigned to it by the time we dropped him off.

Marc said I seemed more excited about all this change than the kids do, and I guess I'm trying to show them that they have so much to be excited about (and they really, truly do). But it's another year done too - and I'm not going to burden them with the lump in my throat that forms while hearing Green Day's "Time of Your Life" during the first grade slide show or leaving them to navigate their way through a sea of new faces.

Last night I watched the documentary "The Kids Grow Up" (dumb idea to watch it on a Sunday night, leaving me too amp'ed up to fall asleep afterward), but it's the story of filmmaker Doug Block's only child, Lucy, and her last year at home before going off to college. But seeing as she doesn't actually want him filming much of her life anymore, it's generously supplemented by many scenes from throughout Lucy's childhood and adolescence. Lucy is ready to go, but dad Doug isn't ready to let her. Some would say it's narcissistic, that he's filming her but it's really all about him, but isn't that what so much of the parenting experience is? Aren't we spending all of this time and effort on them with our own hidden agendas (or sometimes even in plain view)? How can we not focus on our own feelings about what our children are going through, when they are ostensibly the most important thing in the world to us?

My friend Candace snapped a picture of the kids at the JCC picnic last week, and I put it on my desk at work today, updating the picture I had there from three years ago. We're not ready for college yet, but time is flying. 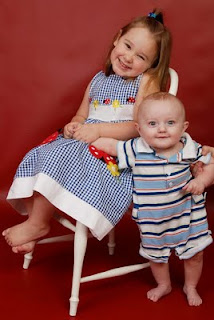 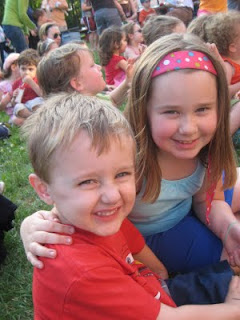