Since receiving my first necklace adorned with a Star of David in fifth grade, I’d worn Jewish-themed jewelry in some form or another fairly consistently. I’d begged my parents for that first necklace for months, with every weekend trip to the local mall. The triangles were crafted from the letters for the word “love,” which I thought was the perfect expression for my love of Judaism. Wearing it each day strengthened my Jewish identity. My friends at camp and youth group wore Jewish jewelry too, and comparing styles (mezuzahs, chais, Hebrew names and hamsas were all common) became almost as ubiquitous as our rounds of Jewish geography (“wait, you know Isaac from the Midwest region too?”).


Over the years, my collection expanded with bat mitzvah and Hanukkah gifts, cool finds at local craft fairs, and a trip to Israel while in high school. I had rings and earrings, and could find a way to weave Jewish jewelry into practically every day. I kept it going all through college and my first full-time job too. At that point, it felt like something to latch on to as I entered the “real world” and left behind the Jewish bubbles I had maintained for so long. By then, my most treasured piece was a hamsa with a bit of turquoise that my boyfriend gave to me shortly after we’d begun dating.


Then one night a few months before that boyfriend became my husband, our apartment was broken into, and all of my jewelry was stolen. We didn’t have much worth stealing then, and most of the jewelry I had wasn’t particularly valuable, but the sentimental value was priceless. My fiance and I scoured pawn shop logs, but the police thought the thief likely threw all of it away upon closer inspection. That idea simply broke my heart.


Friends and family knew how sad I was, and over time, replacement jewelry was purchased with the best of intentions, but I didn’t wear it much. It didn’t hold the same meaning for me, while new pieces in my life did. My engagement and wedding rings, in particular, were precious, and later, a circle pendant that my husband gifted me upon finishing my MBA. I wore it when my son was born, and as he got older, he often looped his fingers through the pendant. I’ve worn that necklace almost every day for the past decade.


The break in was many years ago, and things have changed. Unfortunately, we now live in a more politically charged environment, and wearing a visible sign of my identity feels important again. It took awhile for me to find something that expressed my Judaism but felt like it fit with the 40 year old me, but I finally settled on a delicate bracelet with a Star of David in the center. I thought it might feel awkward wearing it at first, but I noticed how quickly I got accustomed to it. The bracelet felt like it was always supposed to be there. I think that it probably was.
Cheryl Pollock Stober at 12:19 PM No comments:
Share

It's Been a While

I haven't written anything since the kids' birthday letters back in January - so long that my new laptop had never even been to blogger.com before. The last school year was a blur of constant activity, and most of the stories I wanted to share didn't feel like they were only mine, so I stopped writing. I know I feel better when I make time for it though, so hopefully I'll make more of an effort this coming year.

This summer was actually fairly quiet for me. Both kids were at camp - Hannah for seven weeks, Max for three and a half - and then Marc and Max took a really big road trip (Max vlogged all about it on his YouTube channel). I only had one work trip, to Zurich and Amsterdam, which was very exciting but ultimately still a work trip. The kids and I took a quick trip to Cleveland to visit my parents. I read a fair amount, binge watched all of Friday Night Lights, and spent some quality time with our new puppy, Shira. Overall, it was good to have some rest, and I feel ready for fall and a return to routine.

Hannah's about to start high school, Max is finishing up elementary school, Marc's in his second year of cantorial school, and I'm...still the same me? Still evangelizing about bank loans, still trying to convince myself to exercise, still Broadway-obsessed (seeing Jagged Little Pill, the new Alanis Morissette-based show, twice this summer was a highlight), still drinking Diet Coke (though not after 3 pm if I want to sleep!). Still trying to have it all.

I've struggled with writing here because I'm not sure if anyone bothers to read blogs anymore. I mean, I read them all the time, but it's not the same anymore. I miss my blogging pals and opportunities to see them and read about their lives, and I miss sharing my own life with you. I hope there is still space out there to make this effort worthwhile. But it's hard to start again after such a long break, so maybe now that I've written this, I can somehow start again.

And photos of all three of my kids now, just because I can. Yes, I'm one of those annoying dog moms now too. 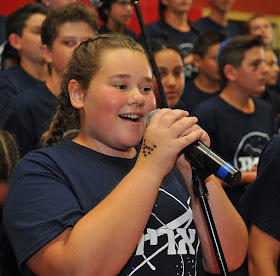 This post is harder to write, knowing how many of your friends now read my blog, but you still wanted it written. I appreciate that you know we both get something out of this exercise. After all, you're grown up enough to see this from my point of view, which is crazy enough on its own. Grown up in so many ways, and yet so far still to go, and high school looming.

So, thirteen. I will never stop saying it: your bat mitzvah was one of the best days of my life, and I think it was for you too. Our day in New York City seeing "Waitress" with Sara Bareilles, eating cheesecake at Junior's and somewhat-enjoying a Starbuck's "Unicorn Frappuccino" is hopefully going to become an annual tradition (without the gross drink - iced coffee instead). You were Ginger in "Zombie Prom" and a conspirator in "The Tragicomedy of Julia Casear," and loved singing with the Troubadours, HaZaPrep and at Junior Districts. You won a poetry slam at school, and went to your first protest. Camp is life, and you live 10 for 2, but still manage to cram so much into the 10.

You have moved on from Converse to Adidas, and wear string bracelets until they break. Your eyeliner game is strong. You are telling me in March that you would go on to win Zimriyah in July, as if there were any question (and you did). You are mostly straight A's but accelerated math sometimes kicks both of our butts. You are too many friends to count, but your Bowen #squad remains true, even with one of you now in Spain. You are always there for your brother, and he is always there for you.

My wish for you as you grow another year older is that you believe in the worth of your own voice. Not just its capacity to hit certain notes with true clarity, but that you believe your words and opinions are always worth being heard, no matter who the audience may be. Speak, sing, chant, belt, cheer, scream, and when needed, wail. And know that I always want to listen. I love you so much, Hanniebelle. Happy 14.

(You can also see letters for ages seven, eight, nine, ten, eleven, twelve and thirteen.)
Cheryl Pollock Stober at 12:00 AM No comments:
Share

Ten feels completely and utterly ridiculous and totally appropriate at the same time. You are not the little boy that Facebook's "On This Day" feature slays me with on a regular basis, with memories of your adorable *and* not-so adorable behavior from years ago. But 10? Dude, that sounds just so very old for my little buddy to be.

Nine was the year where you and I finally seemed to figure each other out, and where the sarcastic edge to your humor got a chance to blossom. You chanted Ashrei at Hannah's bat mitzvah beautifully, and started both guitar and flute lessons. We saw "Wicked" and watched the witch fly during "Defying Gravity," and you were a zebra and a hyena in "The Lion King" this summer. You received your siddur, loved camp, participated in a magician's act and won over 500 tickets in a claw machine.  You love singing, with a solo at Zimriyah, Guys in Ties, and especially anything by Imagine Dragons while doing Karaoke during school choir. I really hope you write that song you'll sing your whole life long #thegreatestshowman.

You're so proud of the fact that you've watched all of "Stranger Things" and it wasn't even that scary. Your biggest goal right now is to become a gaming YouTuber, and you watch several of your favorite channels every day (look for Max's channel in 2018!). You love to discuss Minecraft and Roblox and Harry Potter in excruciating detail - honestly, you love to discuss EVERYTHING in excruciating detail. Your hugs are still epic and you've developed a reputation for them. You have more friends than ever, but your sister is still one of your best ones.

And now you're 10. You're ready for it, and so am I. I can't wait to see you fly as John in "Peter Pan," and I hope you know that however high you want to fly, I'll always be here to help you soar. I'm so glad you're you. Happy birthday, buddy. I love you.