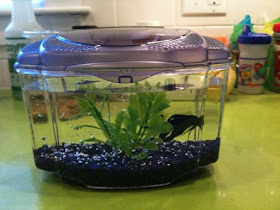 I'm not sure if Ocean's story has ever been told here on ye old blog, but on Friday night, it came to an end. It's the kind of story that when looking back on a long lifetime, one might gloss over, or even forget about. But this blog is my best attempt at an autobiography, so here goes.

Ocean joined our family on April 10, 2010, after the wedding of Marc's cousin David to Torrie. The wedding was just a few days after I had back surgery, so I wasn't able to attend, but the rest of the family went without me. On the way home, I got a phone call telling me that Hannah had won a fish - in a lovely decorative vase that had served as the centerpiece on the tables at the wedding. The game was rigged, as seats had been assigned in advance, and Hannah couldn't be more excited about her first family pet.

After about a month of Ocean swimming around in the vase, Marc finally looked up details on this fish. He hadn't died yet, as we had expected, and it turns out that betta fish can live an average of two to three years. We decided it was time to upgrade his surroundings, and that was when we purchased the tank above. For a family pet, you can't get much more low maintenance than a betta fish - just a few drops of food twice a day, and, well, Ocean was happy as a fish.

Ocean had some close calls over his two year life. When we had been in Paris, we bought a long-lasting type of fish food, which he apparently hated and he nearly starved during that long week we were away. But we were redeemed the following summer when he spent our week in California staying with our neighbors, and even getting a chance to be on Skype with some of their extended family members, as his four year old caretaker was so excited to show him off. A few months ago, I was convinced that Ocean had already died, but Marc was out that evening. I had the kids come downstairs to see him, and after an extended period of time with no movement, he finally began to swim again. Ocean had slowed down substantially these last few months, and on Friday night as Hannah went to feed him right before our Shabbat dinner, we discovered that he was no longer with us.

Hannah and Marc buried Ocean in the backyard this morning. Max cried, but Hannah has taken it in stride. She hugged Max and told him to think about the "Circle of Life" from "The Lion King." It's the first time Max has had to deal with an actual death.

Ocean didn't really add much to our family life. With such simple needs, he was often forgotten about by the family, and I had to tell Hannah to feed him twice a day. Max even used to be scared of him. But for over two years, he was here and a part of our lives. I won't ever pass that corner of the dining room without thinking of him. Rest in peace, little fishy.
Cheryl Pollock Stober at 12:51 PM No comments:
Share 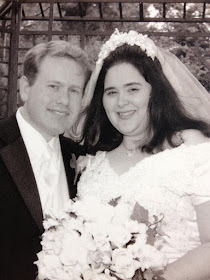 Happy tenth anniversary, Marc.
I love you more than words can say.

We've quickly come up on the end of the school year and all of the extra chaos that comes with that. I've heard some say that June is the new December, but since my kids aren't involved in too many extra curricular activities, I think we've kept a pretty good handle on things. There have still been class parties and portfolio viewings, the Bowen school carnival and the JCC preschool picnic, but Marc and I have had a very "divide and conquer" approach to these last few weeks.

Unlike past years, Hannah seems happy for the year to be over and to be moving on to her much-anticipated summer plans. She still doesn't like being called a third grader though. I am going to miss seeing the four fifth graders who have been at our bus stop for the past three years - I can't believe they'll be off to middle school in the fall. But we are due to get at least four kindergartners to replace them, and it will be fun to see the cycle continue. Hannah and I have spent a lot of time buying, labeling and packing all of her supplies for her two week stint at Camp Yavneh, which she will start on June 27. She is very excited to go, but also looking forward to returning to the JCC Kaleidoscope camp later this summer. If you'd like to send her a letter during her time at overnight camp, let me know and I will send out her address.

Max is excited about finishing up his year in Room K and to be going into the JCC's Transitional Kindergarten (TK) class. He had actually been nervous about it, until we realized he thought the kids in the class now we're still going to be there, and that he had to leave his friends behind to join them. Once that was sorted out, he's now looking forward to being among the biggest kids at school. One more year of full-time daycare payments - the light at the end of the tunnel grows ever brighter. Max is looking forward to swimming in the outdoor pool and playing in the sprinklers with his friends this summer. I'm a bit nervous about how he's going to do without Hannah around for two weeks, since they are usually very close, but I think he will relish more attention from me and Marc, and enjoy writing her "letters" too.

On Monday we'll be driving up to New Hampshire for a couple of days of vacation before we drop off Hannah, visiting one of my favorite places, Story Land. I'm really looking forward to a few days away from the routine - and praying hard that it doesn't rain!
Cheryl Pollock Stober at 4:07 PM 1 comment:
Share

On Pirates and Princesses

For about the last nine months, Max has been obsessed with pirates. Gone were the train discussions he had loved for so long - it was now all about Captain Hook, ships, and a rallying "Yo Ho!" cry. TV shows, clothing, songs and books all featured pirates prominently. He rushes home from school to create his own treasure maps, and turned bookshelves in the winter and the swing set in the summer into his own pirate ship. He often wears his pirate costume, and sleeps at night with his sword by his side - you never know when you might run into an evil pirate. 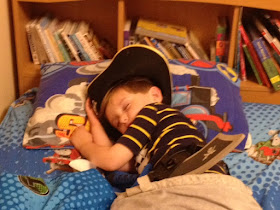 Max's preschool class "studied" pirates, and while the girls in his class were eager to move to other topics, many of the boys haven't been. Max tells me that they still regularly pretend to be pirates on the playground. He says the boys all love his new skull 'n crossbones rain boots. Instead, the girls want to talk about princesses.

Ah, the princess phase, which I remember so well from Hannah's glowing adoration of plastic high heels and endless viewings of Cinderella. In recent years, there has been a lot of hand-wringing over the princesses and what they might be teaching our girls. But what, exactly, are pirates teaching our boys?

There's a lot about pirates that we've obviously tried to shield him from, but like I said, he sleeps with his sword. Pirates are violent, to put it mildly, and it's been a challenge to not glamorize that fact. He thinks "cannonball shooters" are really cool, but I don't think he gets that they're used to sink other ships and harm people. He doesn't know about the "rape and pillage" aspect of pirates...just like Hannah didn't clue into the "I need a man to save me!" aspect of princesses.

I deliberately used the word "phase" above, regarding the princesses, and I know the pirates will be a phase too. While Hannah may have only worn dresses for over a year, she's definitely against anything too frilly or pink now. To her, the princess obsession was just a fun way to learn something more about the world, and not something to get swallowed up by. Hopefully, soon Max will move on to something else too.

Just not before we get to go on this pirate ship together.

Thanks to Abby Glassenberg for helping me realize this was something I should discuss here.
Cheryl Pollock Stober at 1:00 AM 4 comments:
Share

You Just Have to Miss It.

I read Mom101's blog post today, "The inertia of busy mothers – not good for our thighs, or so I hear.", and I totally identified with her words. As you all know well, I hate to exercise. But since February, I've been making a real effort, and meeting with my personal trainer on a weekly basis. Some weeks, I workout additional times on my own, and some weeks I only make it to my training appointment. Having someone waiting on me to show up, whom I've already paid, is the only reliable incentive I found to get myself to go to the gym. (And no need to regale me with cheerful tips about how to make myself more excited to go - trust me, I've put in enough time now to know that this level of excitement is the best I can do.)

When I was pregnant with Max, my amazing endocrinologist took a look at my life (3yo Hannah, working full time, finishing my MBA) and said that if I didn't figure out how to exercise by the time Max was 3, she was coming for me. And she was right - when Max turned three, I started off with my first personal trainer (until The Back got in the way for a while, leading me to restart again this winter). Life had calmed down enough that evenings didn't require the "all hands on deck" mentality of dealing with a baby or toddler. And with everything that happened with The Back, not to mention the diabetes (it's not bad enough yet to deserve capital letters), I'm glad I've gotten going. Yea, I can barely move after our sessions, and it's caused some nasty middle of the night blood sugar lows, but I have to believe that something is better than nothing. I'm not doing this with some kind of "Biggest Loser" mentality; I'm just trying to get myself to move more.

The other factor in all of this, and probably just as big of a factor as that I'd prefer to sit at home watching reality TV, is that I had to acknowledge to myself this simple fact: to find time to exercise, I would have to miss things. I would have to let Marc put Max to bed, and test Hannah on her spelling words. I would have to postpone cleaning the kitchen on some nights. I would miss some bath times, and occasional bedtime stories, and the essence of being together after a day apart. We'd still eat dinner together, and I'd be home to see Hannah off to bed, but I had to allow myself to be okay with missing stuff. For me, that is really hard to do.

So yes, I want to be a positive role model for my children when I exercise. I want the health benefits. But I also want to maintain a healthier approach to trying to do it all, and acknowledge that it really can't all be done. You just have to miss things, and find a way to be at peace with that too.
Cheryl Pollock Stober at 1:11 PM 4 comments:
Share
‹
›
Home
View web version