Hannah wants to be a fashion designer.

Well, that's what she's said she wants to grow up to be since she was four years old. There have been some other careers that have crossed her mind, but she always comes back to fashion design. She's had a tiny bit of experience with sewing and knitting, and is usually a very enthusiastic student for anything art-related. When the pottery class she'd taken recently was oversubscribed for their next sessions, we decided to sign her up for a sewing class.

Hannah had a great trial class at HipStitch, a new sewing school in Newton. She eagerly participated in more lessons, with a goal of making a dress for herself and a matching dress for her American Girl doll, per the school owner's suggestion. But as the lessons went on, it was clear she wasn't accomplishing much, and Hannah's enthusiasm waned. At the end of six two-hour classes, she had very little to show for her participation.

I corresponded back and forth with the owner, who in the end seemed to place blame on Hannah for not being experienced enough and needing simpler projects. She is refunding some of our money, and said she hopes Hannah can come back for more classes when she's older. Hannah unhappily agreed that the class was not a good fit for her in the end. I feel like she was set up to fail - the task was just to big for an inexperienced child - and the school wasn't capable to teaching the number of students enrolled.

Hannah's been very fortunate to take a number of enrichment classes: karate, pottery, Spanish, swimming, soccer, tennis, ballet, tap and art. It's the first time that she's come away with such disappointment. While disappointment is a part of life, it's just a shame that her first sewing experience was such a letdown. Hopefully when she's a bit older we can try sewing classes again.
Cheryl Pollock Stober at 8:30 AM No comments:
Share 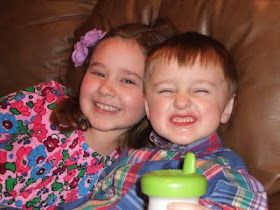 This year's April vacation flew by. Yes, April, for you Midwesterners out there. I think it's a ridiculous time to have a vacation; I prefer the model I grew up with, one week off in March. Vacations in February AND April wreak havoc on working parent schedules, and then school lasts an eternity, into the end of June. But, I have to work with what I'm given, and that's just what we did.

The first night of Pesach was the first day of Hannah's week off, and Max was off from school through Wednesday. We headed to Hartford for the seders, getting a small glimpse of the Boston Marathon as we sat in traffic on 128. I spent some time helping Hannah with her bike riding before the seder, and found that singing Katy Perry's "Firework" is very effective for distracting nervous riders. Our seders were lovely, though we missed Rachel, Jon, Nate and Evie. After our traditional Wright-style seder on the first night, Marc led our smaller group for the second night with a new Haggadah and lots of interesting discussion. Marc and I drove home that night while the kids spent an extra day in Hartford. 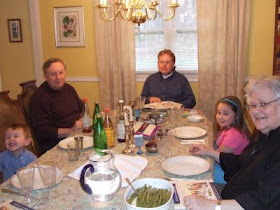 On Thursday morning, Marc dropped off Hannah and I at my office, where we spent the day before catching a flight to visit my parents and see their new house! Hannah and I had a really great time there, getting to relax a bit, do some shopping, and spending a day in Amish country. Hannah was fascinated by the horse and buggies we passed on the road, as well as all of the cheese and candy she sampled along the way. As my mom has told me numerous times, there are some great bargains to be found in Amish country, and I scored a fabulous deal on some new Adirondack chairs for our backyard. I just have no idea when they'll arrive - the Amish will use credit card machines, but they don't send emails with tracking numbers! 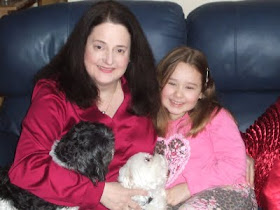 It was wonderful for Hannah to get to see both sets of grandparents in one week. I can't believe we managed to cover another vacation gap so smoothly. Now we begin the march to the end of the school year!
Cheryl Pollock Stober at 5:00 PM No comments:
Share

The past few weeks have gone by in a blur, so here's what we've been up to, in Wordle.net form. I like how the font is half-cursive, like my own hand writing. More on Pesach and the rest of spring break after a trip home to visit my parents and see their new house!
Cheryl Pollock Stober at 1:46 PM No comments:
Share

Recently, my son Max's preschool sent out an email alerting us that an antisemitic group would be staging a demonstration at their facility. His preschool is part of a Jewish Community Center (JCC), an institution that is a fitness facility and hosts arts, cultural, youth and senior programming, and is open for membership to anyone. While I don't know much about the protesting organization, I know they don't particularly like Jewish people, homosexuals, or young men and women who died while serving in the military.

The JCC's email explained that the protesters are not permitted on the property, and that police presence would be involved to ensure an orderly protest. They encouraged us not to interact with the protesters, to not give them the attention they think they deserve. The email reminded us of their first amendment rights, which I support and understand. I was impressed that the JCC seemed to handling everything so well.

So why did my heart start pounding at the thought of these people holding up a few signs? A million thoughts began racing through my mind. Max can't read yet, and isn't likely to notice them, and any questions could easily be dismissed and forgotten in his three year old mind. The campus entrance is a good distance from his classroom, so it's highly unlikely they'd be anywhere near him. I know security is tight and his teachers are well-trained.

But I felt guilty - maybe I should keep him home for the day. Or bring him with me, downtown. He loves taking the train, but his whole routine gets disrupted and he probably won't have a great day. And I start thinking that if I wasn't a working mom, I wouldn't have to think about this, not have to fret about the one crazy person who takes things too far, today or any other day, just because it's a Jewish institution, just because I have to go to work. And my conversations with other descendants of the Holocaust start ringing in my ears, that we can never forget, because it can still happen now.

It's paralyzing, and agonizing that these people, who aren't worth my time, have gotten so far under my skin.

So with a lump in my throat, I let Marc take Max to school that morning. There were police there, but no protesters, and just a few protesters came and went later in the day.

But I really, really hate the effect this has had on me, who didn't even see or interact with them. And I think that's exactly what they wanted.
Cheryl Pollock Stober at 4:06 PM No comments:
Share
‹
›
Home
View web version