As I mentioned in the Halloween post, I've been sick. I spent most of last week resting and working from home, which I probably wouldn't have done in other years. I would have dragged my coughing self in to work and not gotten better for weeks. While I'm still coughing now, it's definitely less of an issue than it could have been. Who knew that resting thing had some truth to it?

But now, Hannah and Marc have been sick. Hannah's had a fever ranging between 100 and 103, but other than that, no major symptoms. Marc doesn't have a fever, but just generally feels lousy. So no swine flu here, but we're taking the necessary precautions to keep it at bay, and that's meaning lots of time on the couch.

There's been a lot of discussion on whether or not to get the swine flu vaccine, if it's available in your area. Hannah and Max both got the vaccine, and Max was able to get a preservative-free version because he's under 3, thanks to some quick action on our part when they became briefly available at our pediatrician's office. This article from the NY Times is a very straight-forward look at the motivations for why we chose to get the vaccine (I particularly liked the part about considering what else your children put up their noses!). But whether you got the shot or not, I hope you're feeling well during the start of this season of sick days.
Cheryl Pollock Stober at 10:54 AM 2 comments:
Share 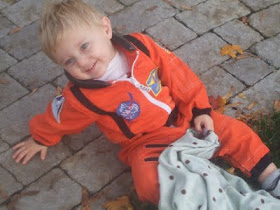 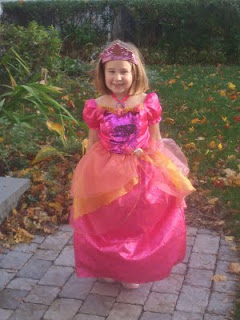 Halloween seemed to be a bigger deal this year, now that Hannah's in public school and celebrating has become mandatory. It started on Friday morning with a kindergarten costume parade and class by class performance. Hannah's class read a poem called "Five Little Pumpkins" which was very cute, but very serious in comparison to another class's attempt at the "Thriller" dance. Then that evening Hannah and I headed back to school for the PTO-organized school party. All the little girls shrieked and hugged each other like it had been weeks since they'd seen each other, not hours. I swear Hannah is really a seventh-grader in disguise. The dance music in the school gym took me right back to Friday night dances at Solon's Arthur Road Middle School (or, at least, it was a middle school then, if not now).

On the official day of Halloween I put the kids in their costumes and we walked over to the Newton Highlands Village trick-or-treating (gotta say it again, I love the village). Max stayed in his stroller as Hannah went from store to store collecting her loot. She got enough candy that she agreed to skip going from house to house later that evening, which was really good because I was starting to feel a cold coming over me, which hasn't let up since then.

So all in all a good, fun holiday. I think this may be Hannah's last year as a princess - she was talking about doing something scarier next year, maybe making her own costume. Next year I'll try to give Max a little more input, instead of dressing him in a too-big costume one year, following it up by him wearing it a bit small the next year. Now I've just gotta stop myself from eating the leftover Twizzlers.
Cheryl Pollock Stober at 1:50 PM No comments:
Share
‹
›
Home
View web version